To Be Sung Upon the Water
Seven Sonnets of Michelangelo, Op.22
Canticle II Abraham and Isaac, Op.51 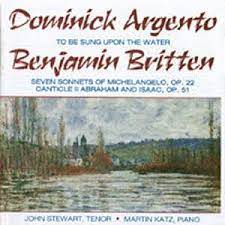 “To Be Sung Upon the Water” (Barcarolles and Nocturnes for High Voice, Piano and Clarinet) is a work in praise of nature. The work is also intended to be a tribute to Franz Schubert, a fellow-admirer of ponds, millwhells, streams, trout, swans and other aquatic phenomena, the tribute acknowledged not only in the title of this cycle (one measure of Schubert’s AUF DEM WASSER ZU SINGEN is “borrowed” to set the text: The image of a poet’s heart), but in the instrumental similarity to his SHEPHERD ON THE ROCK as well.

The “Seven Sonnets of Michelangelo”, Op.22, written for Peter Pears, were composed in 1940 while Britten was in America. Departing from his earlier settings of English texts, he undertook certain continental stylizations, broadening, through the use of this continental idiom, his own distinctive style. The sonnets, therefore, are the most fully realized of the European and Italian character and are recognized as the “songs in which he seems to come to maturity as a song composer.” The Michelangelo Sonnets all deal with love, the lover and his beloved. In Britten’s extremely sensitive settings they cover the gamut of contrasting moods, varying tempi, alternating keys. As Ernest Newman wrote after their first performance. “They are striking and varied in this expressive quality.”

The five works to which Britten gave the title ‘canticle’ are all settings of texts of a religious or spiritual nature and each is scored for a different combination of voices and instruments. The second canticle was written in January 1952 in-between the operas Billy Budd and Gloriana and the setting reflects the by now considerable experience that Britten had as a composer for the stage. The tale of how Abraham is summoned by God to offer up his own child Isaac for sacrifice is set as a highly dramatic scena, using two voices, tenor and alto, which not only perform the respective roles of father and son but also, singing in rhythmic unison, the other-worldly sound of the voice of God. Although originally written for the voices of Peter Pears and Kathleen Ferrier (to whom the work is dedicated), the work gains considerably in impact if the part of Isaac is performed by a boy (as on Britten’s own recording from 1961). When, some twenty years later, Britten came to write the Offertorium movement in the War Requiem which includes a setting of Wilfred Owen’s bitter rewriting of the Abraham story ‘The Parable of the Old Man and the Young’, he drew on the second canticle for much of the musical material.