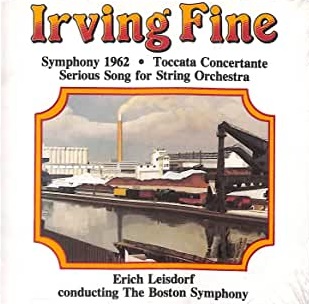 Irving Fine (1914-1962), a Piston student at Harvard, was an academic neo-classicist who wrote serious but eclectic music; Stravinsky’s influence weighed heavily, and it colored his Music to such an extent that he was once thought a mere imitator. “Toccata Concertante”, from 1947, could be a movement from a Stravinsky symphony, revealing Fine’s inability-at that time-to escape the master’s style, but also demonstrating his superb craftsmanship. “Serious Song”: A Lament for String Orchestra (1955) is still solidly tonal, and it reflects the sonorities of earlier string writing, from Vaughan Williams to Ernest Bloch. With “Symphony 1962” Fine opens up at last. Copland calls the symphony “dramatically dissonant and daring.” It has the feel of a major work though it mostly lacks classical structure, nothing ever seems diffuse. Its three movements are Intrada, Capriccio, and Ode, the last a big, free-wheeling finale with a dramatic finish. The symphony is played to the hilt by the Boston orchestra in the composer-led live performance. Maestro Leinsdorf does equally well with the other works.

Phoenix has done a fine job remastering a Desto LP, in turn licensed from RCA; the sound on this disc has all the clarity and impact of its 1966 “White Dog” original, LSC- 2829. All but the final paragraph of Aaron Copland’s notes are reprinted here, as are an abbreviated version of Arthur Cohn’s biographical notes and all of his analyses of the three works. Phoenix should be thanked for enabling a new Generation of music lovers to get to know Irving Fine.