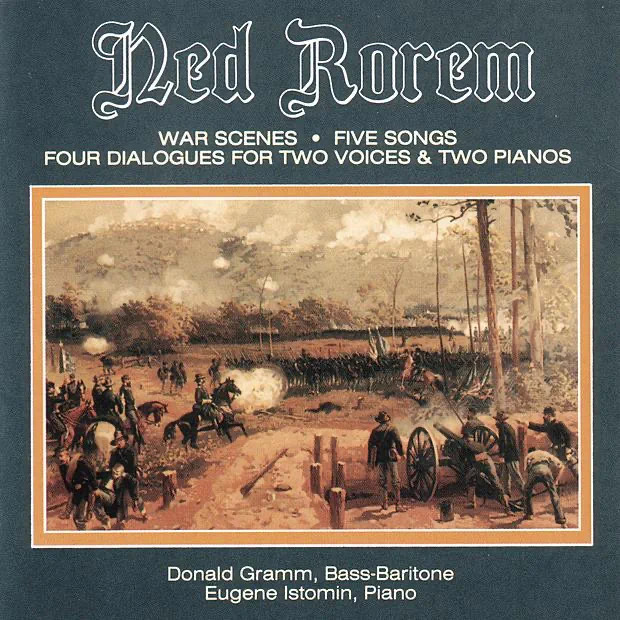 The texts for the cycle, WAR SCENES, were very freely excised from Walt Whitman’s diary of the Civil War titled “Specimen Days.” The music was designed for Gerard Souzay who first performed it, with pianist Dalton Baldwin, in Constitution Hall, Washington, D.C., October 19, 1969. The published score contains the following dedication: “To those who died in Vietnam, both sides, during the composition: 20-30 June 1969.”

The “Five Songs to Poems by Walt Whitman” were all composed in the summer of 1957 in Hyeres, France. they were commissioned by Walder Luke Burnap who premiered them, self-accompanied at the viginals, in New York the following spring.

The late Frank O’Hara conceived the words to “The Quarrel Sonata” (as he first called the FOUR DIALOGUES) expressly to be set by me for the unique combination of two voices and two pianos. This was accomplished early in 1954, mostly in London and Paris. The premiere took place on March 23rd of the following year at a private concert in the Contessa Pecci Blunt’s Roman palazzo. This lavishly somnolent old-world decor seemed gorgeously anachronistic to our glib non-poetry and vulgar music which, in their comic-strip tightness, pre-dated Pop Art by a decade.