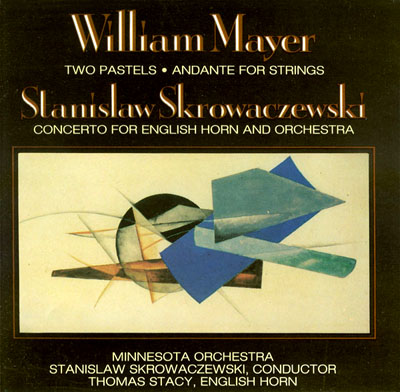 Concerto for English Horn and Orchestra

American composer William Mayer (b. 1925) writes what has been called “mere music, ” ‘That is, this music breaks no new ground, expounds no theories, “merely” contributes to the beauty in the world. I don’t find myself rethinking my ideas about music because of these pieces, but I do find myself putting them on for interest and enjoyment. Even when these works were written, in the late 1950s, they were by no means radical. But they are still worth hearing, and not just once. Thanks and bravo to Phoenix for resisting our national tendency to discard any composer who is no longer the latest thing.

Mayer’s music is warm and expressive, somewhat in the vein of Samuel Barber, but Mayer’s harmony is more diatonic, closer to that of the American neoclassical composers. The “Two Pastels” are knottier than their title might imply. Their delicate quality, intentionally “otherworldly,” is balanced by a sometimes surprising intensity. Mayer’s Andante, like Barber’s often-recorded Adagio, was originally the slow movement of a string quartet. Mayer’s work would make an excellent alternative to the Barber-it should be better known, not only on disc but in concert. This is the work on this disc that I most often return to, finding it more affecting with every hearing.

The Concerto for English Horn and Orchestra is the first composition I’ve heard by the Polish-bom conductor Stanislaw Skrowaczewski (b. 1923). His language is more chromatic than Mayer’s, and he includes prominent multiphonics for the English Hom. There are hints of the textural explorations of Skrowaczewski’s fellow Poles Penderecki and Lutoslawski. But Skrowaczewski’s musical discourse relies on traditionally expressive solo phrases rather than massed orchestral effects. This is not typical “conductor’s music,” in that there are no empty effects borrowed from orchestral showpieces. (For that matter, Skrowaczewski isn’t an empty, showy conductor.) The orchestra is treated delicately-the necessity of balancing the English Hom sparks several intriguing textural ideas. This is a thoughtful composer with something to say.