The Music of INGOLF DAHL 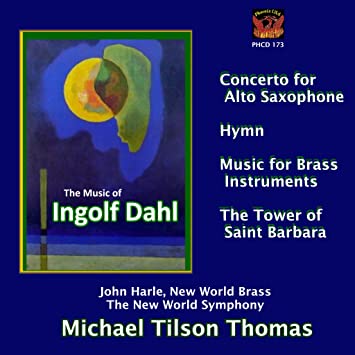 The Music of INGOLF DAHL

The Tower of Saint Barbara

A tribute to Ingolf Dahl by Michael Tilson Thomas:

I first met Ingolf Dahl during registration at the University of Southern California. He was conducting the orchestra that semester and bustled with his endless curiosity among the offices of the instrumental departments, to see in person what kind of students were coming in.

During our first ten-minute encounter, he asked me about my familiarity with the Webern Six Pieces, in which I was to play, and simultaneously advised other waiting students about performance practice in Polish Renaissance music, notation paradoxes in serial writing, and the importance of rubato as a device of delineating form in Beethoven and Webern. Having charged all of us up with his spontaneous pyrotechnics, he dashed off to meet with other students and faculty. His greetings and distinctive high-pitched laugh seemed to be coming from every office of the building at once.

The six years I spent at USC were in no way to diminish this spectacular first impression, but rather to increase the effect as I began to perceive the vast reserves of knowledge, inspiration and humanity that lay behind it. He was a musician’s musician, and above all a real composer. His output of more than 30 compositions includes masterworks, among which especially the Sonata seria, Concerto a tre, Trio, Concerto for Alto Saxophone and Wind Orchestra and Music for Brass Instruments stand as some of the finest pieces of the last 30 years.

He never took the easy or fashionable way out in his works and would revise them until, like the works of Bach and Ockeghem which he much admired, they had a sense of oneness, of tension and balance and hidden craft like a work of architecture. At the same time he delighted in expression, and in fashioning a piece for a specific player. A final step in his composing was looking over each individual part to make sure it would be satisfying to play. This balance between the abstract and the personal is a perfect portrait of himself. As I think of Ingolf now, I feel immensely grateful to have known him as my teacher, colleague, and friend. I know too that for the rest of my life, whenever I ponder an artistic decision or think of what would be the most exciting, important and courageous thing to do, his voice wiil be there giving with humor, conviction and love his always sage advice.

(Adapted from an article which appeared in the Los Angeles Times on 20 September 1970, a few weeks after Dahl’s death)