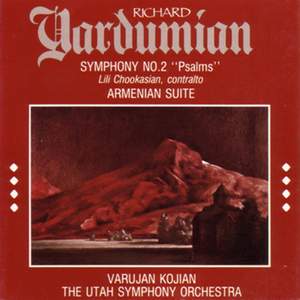 For those who don’t know Richard Yardumian’s music, he was a composer of Armenian ancestry, long resident in Philadelphia. Those who like the music of Alan Hovhaness will probably be attracted here, though the music is somewhat more straightforward and less exotic than that of Hovhaness.

“The Armenian Suite”, as you might expect, is based heavily on Armenian folk themes. It is great fun to listen to it. The symphony began life as a single-movement setting of Psalm 130. It later grew to include a second movement with this text being written specifically for Lili Chookasian.

This is the only recording of the 1981 revision of the symphony, so there hasn’t been any competition in that respect. Kojian gives a sympathetic reading of both works. Chookasian is effective, but her voice was beginning to show some strains most notably in too much vibrato when under stress. The Phoenix USA recording seems to be clean and well balanced. Recommended.