Songs, Drones and Refrains of Death 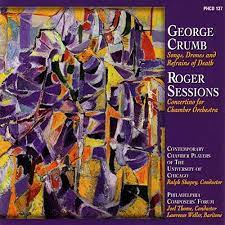 Songs, Drones and Refrains of Death

Contemporary Chamber Players of The University of Chiago          Sessions: Concertino for Chamber Orchestra

This disc showcases the virtuosity and lyricism of the two performing ensembles as well as the works they perform. George Crumb,who has created other musical settings of poetry by Federico Garciá Lorca, embraces these texts with a singularity of purpose. Even Crumb’s manuscripts are crafted to reflect the words: in some cases the music is set down in various shapes (such as circles). Although the composer often uses a limited ensemble of instruments (rather than a full orchestra), he seems to evoke every possible sonority. In Songs, Drones and Refrains of Death, for example, Crumb deftly uses the sounds of the jew’s harp, water-filled crystals,guitars(both acoustic and electric),”altered” piano, and a cacophony of percussion instruments to highlight Lorca’s textual canvas. Added to this is a whole world of whispers, shouts, phoenetic sounds, and yes, even old-fashioned singing by the baritone soloist. It is quite a formidable undertaking to perform Crumb’s music, but the Philadelphia Composer’s Forum elegantly captures the simultaneous brightness and darkness of these haunting settings. Baritone Lawrence Weller has the perfect voice for this work. This is a remarkable performance.

Roger Sessions’ Concertino for Chamber Orchestra makes different demands upon its performers, but requires a similar level of musical expertise as Crumb’s piece. This Concertino doesn’t involve unusual performance techniques like Crumb’s does, but Sessions treats each player as a soloist. Wind players are asked to play multiple instruments, augmenting their challenge. There are occasional ensemble problems in the performance of the Sessions–mostly in terms of synchronization–but then again, a lot is expected of each player. And in the end, the energy of the piece is sustained, so it’s easy to overlook such minor blemishes. The liner notes were written by the composers themselves, which is an added feature to this valuable re-issue.