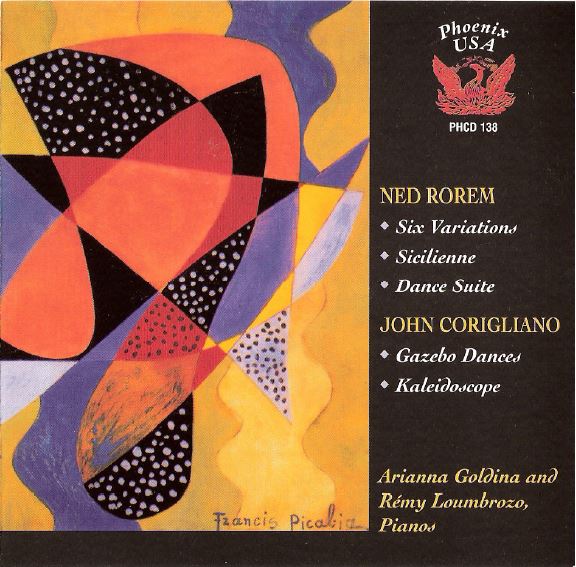 Did I really give birth to the Dance Suite a half-century ago, then stash it in a trunk where it lay forgotten until today? (Not quite forgotten: eight years later I did orchestrate the Bemsteinish “Overture” for my Third Symphony which Bernstein premiered the following year.) The Suite, as such, has never been played until the present recording; I resuscitated it especially for Remy and Arianna to augment their program. But hearing it now is like coming across an old snapshot of oneself. was I actually once so young and eager?

The tone sounds quite American, doesn’t it? I was twenty- five when it was composed, living deracinated in Fez, Morocco. Perhaps for that reason I sought to cleave to my roots by stressing jazz cliches, notably the eccentric rhythms within a concentric pattern, and in the “Finale”, incorporating a Ragtime – as remote as possible from the mournful palms of Africa. Though maybe, as I listen again, the piece also contains a core of France.

The brief Sicilienne, too, was written in Morocco a year later. (“Thought up in Sienna, written down in Fez,” says the manuscript.) Commissioned by Gold & Fizdale, who never performed it, it was championed by Whittemore & Lowe, then taken up by many other two-piano teams. Those were the days.

Those were, indeed, the days. Since the 1960s new literature for such teams has, for whatever reason, dwindled, as have the teams themselves. Not until the present decade has the medium been revived, almost single-handedly (or double-handedly) thanks to the bi-annual Murray Dranoff Competition in Miami. It was for this competition that I was invited, in 1995, to compose the Six Yariations for Two Pianos, which all the contestants were obliged to learn. (For the record I have one other piece in the genre, Four Dialogues for Two Voices and Two Pianos (available on Phoenix PHCD 116).

I’m delighted to be sharing this CD with an old friend and colleague, John Corigliano. And we are both, I think, delighted by the resplendent interpretations of Goldina and Loumbrozo.

Gazebo Dances (1972) was originally written as a set of four-hand pieces dedicated to certain of my pianist friends. I later arranged the suite for orchestra and for concert band, and it is from the latter version that the title is drawn. The title Gazebo Dances was suggested by the pavilions often seen on village greens in towns throughout the countryside, where the public band concerts are given on summer evenings. The delights of that sort of entertainment are portrayed in this set of dances, which begins with a Rossini-like Overture, followed by a rather peg-legged Waltz, along lined Adagio and a bouncy Tarantella.

Each movement was given a dedication which are as follows: I – for Rose Corigliano and Etta Feinberg; II – for John Ardoin; III – for Heida Hertnanns; IV – for Jack Romann and Christian Steiner. Kaleidoscope for Two Pianos (1959) was written during my student years as an undergraduate at Columbia College (1955-1959). The work began as a project in Otto Luening’s composition class, and is dedicated to Luening and to composer Marc Bucci.

As the title implies, Kaleidoscope is a colorful mosaic of changing symmetrical patterns, some infused with a ragtime feel, others highly lyrical in content. The work is in ternary form with an extended lyrical center which treats a folk-like melody to a variety of contrapuntal elaborations. In general, Kaleidoscope is high spirited and full of the energy of youth. It received its world premiere at the Spoleto Festival (Italv) in 1961 by pianist Stanley Hollingsworth and Morey Ritt.

It’s no surprise that duo pianists Arianna Goldina and Remy Loumbrozo, who struck deep into the heart of Durufle and Ravel on their first recording for Phoenix, can capture composer Ned Rorem at his American Francophilic best. What is more surprising is how well the premiere recordings of these works accommodate John Corigliano’s two-piano pieces. Opening with Rorem’s Six Variations for Two Pianos, a piece written for the 1995 Murray Dranoff Two-Piano Competition in Miami (which Goldina and Loumbrozo won in a previous year), Rorem is clearly speaking from French turf, harmonically mysterious and broodingly introspective — a far cry from the 25-year-old composer of his Dance Suite (1949), full of brash Bernsteinish Americanisms that are not so much French as anti-German in sensibility. From 1949 we jump to Corigliano’s Gazebo Dances from 1972. Both the Dance Suite and the Gazebo Dances have been orchestrated (the concert band version of Gazebo Dances and its image of summer pavilions inspired its name), but even here in their two-piano form, the pieces fit together like a pair of jeweled gloves. Both open with lively Overtures, lead into Waltzes, and feature bouncy Tarantellas. The remaining pieces, Corigliano’s Kaleidoscope (1959) and Rorem’s Sicilienne (1950), serve mainly to fill up the disc to a marketable length, though Goldina and Loumbrozo never let their attention waiver from the material for a moment.