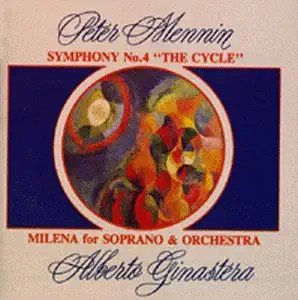 The Mennin Symphony No. 4 for Chorus and Orchestra, subtitled THE CYCLE, was begun in the summer of 1947 and completed in November 1948. The composer himself wrote the text for the chorus. It was commissioned by the Collegiate Chorale, which organization, assisted by members of the New York Philharmonic, gave the work its premiere, under the direction of Robert Shaw, at Carnegie Hall on March 18, 1949.

Milena Jesenska belonged to an old Czech family, and the correspondence whcih Kafka addressed to her began in 1920 and lasted two years. Ginastera relates: “Since my youth, when Kafka first became my favoite twentieth century author, these “letters to Milena” fascinated me because, in them, the cretor of fantastic and metaphysical stories becomes a man in love and heartsick. That is why, when the Institute of International Education of New York commissioned me to write a work in celebration of its fiftieth anniversary, I proposed this CANTATA FOR SOPRANO AND ORCHESTRA which had been on my mind for decades. I composed this work in 1971, after a silence of more than three years, which was broken when my wife, the cellist Aurora Natola, entered my life.”