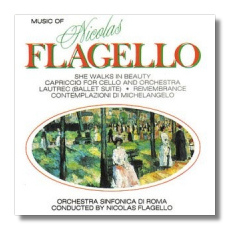 If you like traditional Romanticism intensified by post- Romantic harmonic astringency and are still unfamiliar with the music of Nicolas Flagello, then you have a treat in store. And if you have already acquired the disc of Flagello’s piano music (Premier PRCD-1014), then you will need no urging to grab this new release featuring vocal and instrumental works with orchestra-some reissued from hard-to-find Serenus LPs released during the mid 1960s, some never released before. For Flagello is America’s greatest-and perhaps final-living exponent of the grand Romantic manner, and most of the works on this disc support that claim. Born and raised in the post-Romantic tradition, he reveres its many masterpieces, traces of which drift through his own music with comfortable familiarity, and I will cite some of them to help the reader identify the music’s “sound.” Yet despite the undeniable reminiscences, Flagello displays a strong creative personality with his own unmistakable vision and a distinctive language through which to project it.

The works on this CD never issued previously are two vocal settings, one of Byron’s “She Walks in Beauty”, the other of Emily Bronte’s “Remembrance”. “She Walks in Beauty” is a song composed in 1957 and dedicated to Flagello’s beloved mentor Vittorio Giannini. It exhibits the same sort of soaring, lush lyricism characteristic of the elder composer. “Remembrance”, which Flagello set in 1971, is a darker and more ambitious composition. Originally scored for soprano and string quartet with flute obbligato but presented here with a larger string group, it evokes a gothic atmosphere haunted by despair and resignation as it expresses a never-forgotten sorrow over the loss years earlier of an irreplaceable love. “Remembrance” bears a superficial resemblance to the affective ambience or Barber’s “Dover Beach” and Schoenberg’s “Verkldrte Nacht” without sounding like either of them.

The other vocal work on the disc is “Contemplazioni di Michelangelo”, settings of four of the great artist’s sonnets, selected to portray four stages of life and love. This is unquestionably great music-serious in tone and with a grandly impassioned rhetoric, suggesting an amalgamation of Puccini and Strauss, with touches of Respighi. The vocal writing is operatic in scope, the orchestration masterful in its richness and power, while calling for only a modest-sized ensemble. Not only does the work show great technical assurance, but it displays an unequivocal confidence in its expressive aims often missing from the work of lesser twentieth-century traditionalists.

The other unquestionable masterpiece on this disc is the “Capriccio for Cello and Orchestra”. Despite its title, there is nothing playful about this work; rather, it is capricious with respect to its formal structure, a self-generating free-form rhapsody on a single three-note motif. This is another dark work-Flagello has a marked propensity for gloomy moods and tragic emotions. Its tone resembles that of Bloch’s “Schelomo”, but it is more tightly constructed and more emotionally intense (can you believe it?). It is virtuosic without being cheap or shallow, there is not a superfluous note, there is not a phrase that doesn’t contribute in some way to the overall meaning of the work. I cannot understand how this piece, in existence now for thirty years, has failed to enter the active cello repertoire-a repertoire not exactly overflowing with masterpieces. Flagello’s “Capriccio” ranks with the best.

“Lautrec” is somewhat out of character for Flagello. A four-movement orchestral suite, it is one of his only works that is descriptive, rather than emotionally expressive- and the third movement is pretty expressive at that. Sumptuously orchestrated, it is richly evocative of Parisian nightlife at the turn of the twentieth century. A more proficient ensemble than Flagello’s pickup group could make a dazzling showpiece of it. Phoenix is to be congratulated for making this extraordinary music available.