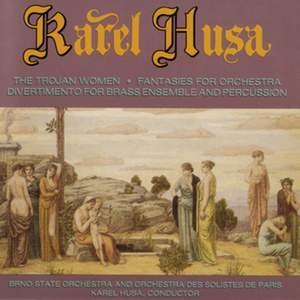 The works on this disc show three different sides of Karel Husa. The Divertimento, written in 1958, is a light, charming piece of Neoclassicism in four brief movements. The more expansive Fantasies for Orchestra from 1956 is one of the composer’s finest works, virtually a three-movement symphony. The opening movement brings to mind Bartók, especially in the slow, constantly building passage for strings that occupies its first half. The second movement is an exhilarating dance, based on a two-plus-three rhythm that suggests Eastern European folk music. The Finale is called “Nocturne,” and there are once again suggestions of Bartók — the connections to the latter’s night music are obvious — but far less tense and a bit more lyrical. This is a splendid piece that should be a concert staple.

The scenes from “The Trojan Women” show again a different Husa, quite comfortable with orchestral and compositional techniques of the second half of the century. There are dissonant clusters, a huge percussion battery, and the use of microtones, all of which help to create a score of considerable tension and dramatic power. The piece demonstrates one of Husa’s greatest talents, the ability to use effects often associated with more forbidding music in a manner that always remains accessible for the audience.

The performers are very good, but the Brno State Orchestra seems the most comfortable with this music, even though theirs is the most complex piece. The notes offer no technical information about the recordings — they are clearly three different dates and locations — but the recorded sound is for the most part good. This disc would make an excellent introduction for those who would like to get to know the work of this exceptional composer.