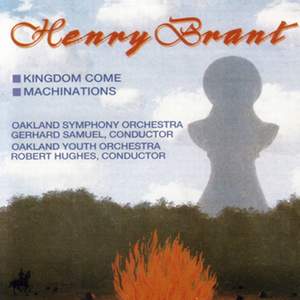 In most chronicles of 20th-century music, Henry Brant is given a special place as an innovator whose works explore the “spatial” possibilities of music. In many of his pieces, groups of performers are not only placed in different parts of the hall but are also given strikingly contrasting music, often requiring more than one conductor. The first piece on this disc, Kingdom Come, uses two orchestras. In live performances, Brant asks that one orchestra be onstage, the other in the balcony (for the recording, they were recorded in separate sessions). The first orchestra is a standard symphonic group with organ; its music is tense, dissonant, and played loudly and consistently throughout the piece. The second orchestra is, as the composer says, a kind of circus band, consisting of “slide trumpets, slide whistles, sirens, klaxons, buzzers, electric bells, ratchets, air compressors and a soprano who impersonates a psychotic Valkyrie.” This curious assortment of instruments produces a strange merry-go-round music that intermittently clashes in an almost tragicomic manner with the serious, modernist tone of the stage orchestra. This is a fascinating piece, and it suggests layers of meaning far beyond those that the composer discusses in his useful notes.

The second piece, Machinations, is interesting chiefly because Brant, through the miracle of the tape recorder, plays all of the instruments himself — timpani, chimes, xylophone, glockenspiel, organ, a number of varieties of flute, and harp. The work was improvised in a studio, and in the final mix some of the parts were altered electronically. While there are interesting moments, and while Brant’s musicianship is impressive, the piece lacks focus — it may also be that the powerful first piece on this disc is a tough act to follow — and goes on too long.

The recorded sound of both pieces is good. Brant is a significant figure in the history of American music, and I hope that this disc either signals or starts a reawakening of interest in his work.