Music for Violin and Piano 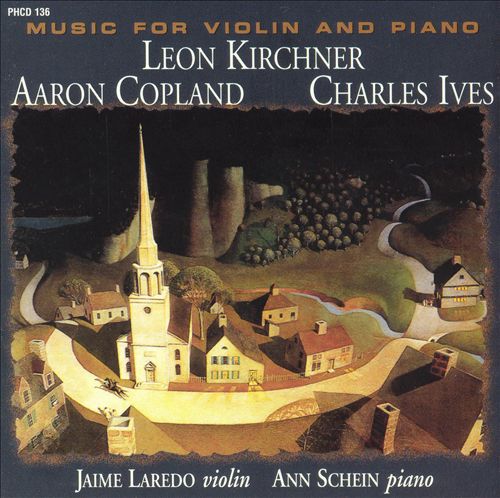 Music for Violin and Piano

The Sonata No. 4 is probably the most engaging of Ives’ four violin sonatas. And, while serious collectors of musical Americana will surely want to have the complete set (I recommend the outstanding version by Gregory Fulkerson and Robert Shannon on Bridge), this performance by Jaime Laredo and Ann Schein captures the music’s clangorous rapture as well as any other.

Lardeo’s tone can be a bit gruff and rough-hewn, but that serves this music well. In fact, it adds some necessary grit to Copland’s Violin Sonata, a beautiful work that is every bit the equal of the composer’s far better known orchestral works. Surprisingly, this Sonata has been infrequently recorded; one might think that at least some of today’s talented young would have added it to their discographies by now.

After several auditions, I still haven’t warmed to the Violin Sonata No. 2 by Benjamin Lees (b. 1924). The composer aptly describes the music as “angular and muscular,” but the music’s angular muscularity is not really the problem. Lees clearly is a craftsman, and the Sonata is well-written. However, I only found bits of the thematic and harmonic material to be compelling. Also, Rafael Drurian’s playing is considerably less assured and polished than Laredo’s.

Leon Kirchner (b. 1919) is one of this country’s greatest composers, and his neglect by peformers and record companies is shameful. Kirchner’s music has a dissonant veneer–he was a student of Schoenberg and Roger Sessions–but it’s Romantic music at its heart, full of sweeping melodic gestures, sweet, aching lyricism and richly expressive harmonies. This Sonata Concertante is a stunning work, and one that makes substantial technical and musical demands on its performers. Jaime and Ruth Laredo play it for all it’s worth.