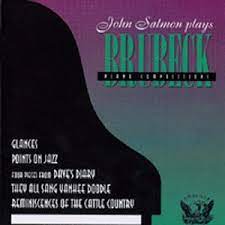 In the Composer Notes to the published edition of They All Sang Yankee Doodle, jazz pianist and composer Dave Brubeck says: “My earliest memories are a strange juxtaposition of sounds, hymns and Bach chorales from the church next door, where my mother was choir director; early twenties jazz from my oldest brother’s dance band; classical piano from my middle brother and my mother’s piano studio; and the cowboy songs that I have always identified with my father.” In the genial, unpretentious, often swinging piano pieces recorded by John Salmon, we can hear many of those influences. Those who know Brubeck’s jazz work will hear echoes of the many pieces he has written for his quartets as well, and I suppose that listeners who know Darius Milhaud may hear traces of that influence.

The earliest of the pieces here Dave’s Diary and Reminiscences of the Cattle Country were written after the war when Brubeck was studying with Milhaud. Two of the pieces were commissioned as ballets, composed on the piano, and orchestrated by others. The Murray Louis Dance Company commissioned Glances: Brubeck tells us, and he still sounds horrified, that every step of the choreography was written before he was asked to write the music. He had to fit his pieces to what was already there. Points on Jazz, with its evocation of the history of jazz, was commissioned by the American Ballet Theater. On those pieces, Brubeck first recorded for himself a basic piano track, which he then improvised over. The final versions combine the improvisations and the basic tracks.

Points on Jazz is, as the title might suggest, the suite that is closest to Brubeck’s jazz world. All of the compositions Salmon plays have a folksy charm in the tradition of Gershwin and Copland. They frequently, as in “Dad Plays the Harmonica,” have something of the rhythmic ingenuity that Brubeck is famous for. Still, this disc adds to our knowledge of Brubeck’s musical personality. There’s an unadorned wistfulness in many of these pieces that I rarely hear in the jazz Brubeck, or in the early octets and other chamber “jazz” that he wrote under the combined influence of Milhaud and of postwar modern jazz. “A la Turk” sounds like a preliminary version of what in the quartet recordings has always been called Blue Rondo à la Turk. It begins with a furious rhythmic pattern jazz fans will recognize immediately. But the melody is subtly different: it sounds to my ears Spanish, and whereas the jazz piece leads to an obviously funky blues section, this version leads to a swirling left-hand pattern and a gently nostalgic restatement of the theme. I’ve never heard in Brubeck’s live performances anything like the elaborate humor of They All Sang Yankee Doodle, with its Ivesian quotations of folk material. All of this music is appealing, and it is well played by John Salmon, who seems as home with the jazzy Brubeck moments as with the Ivesian. I’d recommend this disc to anyone who likes, say, Ives’s symphonies, Gershwin’s Preludes, or Copland’s ballets.