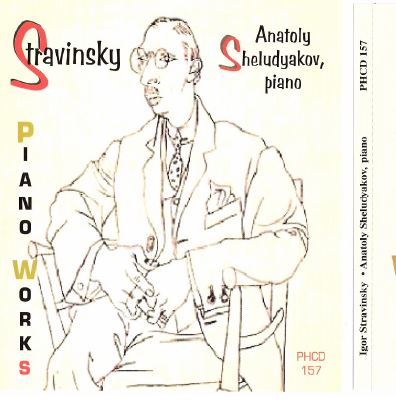 Three Movements from Petrouchka is dedicated to Arthur Rubinstein who, according to Stravinsky, paid him a larger fee for this work than Diaghilev paid for the complete ballet! Stravinsky insisted Three Movements was not a piano reduction of the ballets orchestra score, but “piano music.” It also contains passages found in a 1918 version of the work for pianola (a mechanical player piano). Stravinsky, having the immense skills of Arthur Rubinstein in mind for the Three Movements, not only produced a tour de force of chord, octave, and arpeggio technique, but a way of writing that makes the piano sound exceptionally brilliant and orchestral. Unfortunately, Rubinstein did not record this piece, but the German pianist Carl Seemann recalled, with great pleasure, hearing Rubinstein perform it.

Stravinsky’s two other solo piano works from the 1920s, written within a twelve-month period, embrace a neo- classicism. He indicated that his title, Sonata for Piano, did not reflect the form of Haydn and Mozart sonatas but referred to the original meaning of the source word, sonare, meaning sound, as opposed to vocal music (cantare). Proceeding with a fairly rapid, often perpetual motion, the sonata’s outer movements frame the remarkable Adagietto in which Stravinsky presents one of his most elaborate flights of decorated melody. The sonata received its first performance at the Donaueschingen Festival in July 1925.

A practical and a musical motivation influenced the composition of the Serenade. Stravinsky was negotiating the recording of some of his music with an American record company. Thus the time limitations per side of 78-rpm recordings dictated the length of the movements of the Serenade. The other influence was his desire to write some music “in imitation” of the eighteenth-century serenade, music often intended for special occasions. In his Autobiography, Stravinsky described the Hymne as a “solemn entry,” the Romanza as “ceremonial homage paid by the artist to the guests, the Rondoletto as filling the role of “various kinds of dance music,” and the Cadenza Finale as a “sort of epilogue which was tantamount to an ornate signature with carefully inscribed flourishes.” The Serenade was premiered in November 1925, in Frankfurt.

Stravinsky described Piano-Rag Music (1919) as a written- out portrait of improvisation. Roman Vlad writes that in it “jazz elements are broken down and crushed to a pulp, then reassembled as if processed by a diabolical machine.”

The two sets of pieces for piano duet date from 1915 and 1917, respectively. Three Easy Pieces has a simpler part given to the second pianist. The reverse holds for Five Easy Pieces, composed for Stravinsky’s children.