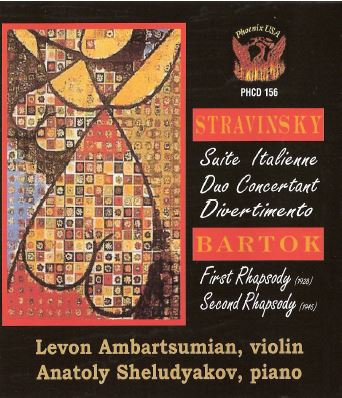 Stravinsky and Bartok MUSIC FOR VIOLIN AND PIANO

Most of the violin music by Igor Stravinsky was created during the early 1930s. The impetus for writing these works was Stravinsky’s meeting with the violinist Samuel Dushkin with whom the composer, as pianist, toured Europe and Latin America from 1931-1937. The Duo Concertant was composed in 1932 and shortly thereafter performed in Berlin by Dushkin and Stravinsky. The work, as its title suggests, adheres to the principle of balance between two equally important solo instruments. The underlying program, as Stravinsky suggests is the quality of ancient Roman poetry and more specifically to quote Stravinsky, “a musical parallel of pastoral poetry.”

Suite Italienne of 1933 and the Divertimento of 1934 were both performed by Dushkin and Stravinsky shortly after their composition. They are based on music from Stravinsky’s ballets Pulcinella and Le Baiser de la Fee. Having retained the main principle of Duo Concertant; that of a concerto character with parity for both solo instruments, Stravinsky further introduced into these works, the character of thematic derivation. In the case of the Suite Italienne thematic material of Pergolesi and in the Divertimento, that of Tchaikovsky.

Both of Bartok’s Rhapsodies were written in 1928. The First Rhapsody is dedicated to Joseph Szigeti, the Hungarian virtuoso violinist and the Second Rhapsody to Zoltan Szekely, another old friend of Bartok’s. Both compositions are written in typical two part lassu-friss (slow-fast) form of the czardas. The First Rhapsody exists in many versions: for violin and piano, for violin and orchestra, for cello and piano and also with two different endings. The Second Rhapsody was revised in 1944 and also exists in two versions: for piano and orchestra, as well as in its original edition and a later condensed and revised version.