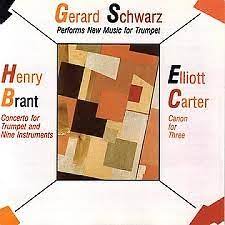 The Henry Brant “Concerto for Trumpet and Nine Instruments” comes from his 1935-1945 period when he sought to exploit different musical ingredients in each work, but singly, not in superimposition. In its 3 movements the trumpet appears both as a lyric, and as a scherzo-oriented instrument in several different idioms which are applications of various kinds of musical Americana. Abstractions of jazz elements appear, as well as ironic comment.

The Elliott Carter “Canon for Three” (In Memoriam Igor Stravinsky), can be performed by any three instruments, with different colors, having the proper range. One of the three versions Carter mentioned in the score is for muted trumpets using three different mutes. This recording begins with this version, and ends the recording with an open version using three different trumpet-like-instruments (flugelhorn, cornet and regular trumpet).