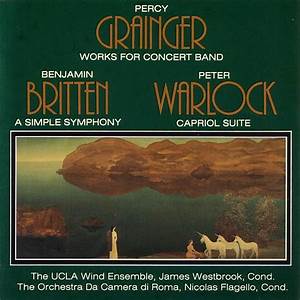 Phoenix, as befits its name, resurrects interesting recordings from small labels that have either ceased to exist, or have other reasons for not reissuing older recordings on CD. The present disc combines most of the contents of a Varese-Sarabande 45-rpm LP with performances from the defunct Peters International label; the former was recorded with digital equipment in 1980, the latter with analog equipment in 1977.

However disparate the recordings of the big concert band and the little string orchestra may seem, their combination here proves to be musically satisfying. The Grainger works take up something more than half the disc, and are played by a conductor and band who lovingly convey the skill and ingenuity with which the Australian composer wrought them. Nicolas Flagello and his Roman strings provide a welcom contrast. Unifying the whole program is a certain folksy quality deliberate in two of the scores and unconsciously but equally present in the other.

There are more elegant and more polished recordings of all these works listed in the current catalog-Frederick Fennell and the Cleveland Orchestra Winds on Telarc in Grainger’s “Lincolnshire Posy”, for instance, but the present disc restores to the catalog spirited, enjoyable performances, well recorded, and certainly recommendable to any who like this unusual but sensible combination.