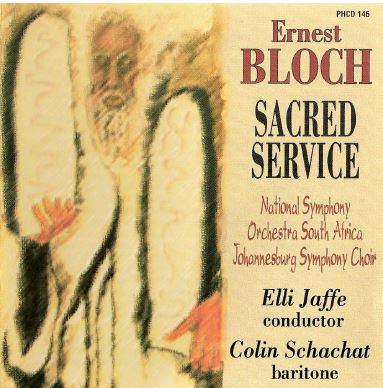 The Sacred Service (Avodath Hakodesh), dates from 1930-33. The six-note motif G-A-C-B-A-G, heard at the very outset, and which permeates the entire work, has been found in one of Bloch’s early manuscript books, with a comment “for a possible Jewish service” written above it. However, it was not until 1927, while a Director of the San Francisco Conservatory that he began to make specific plans with the help of Reuben Rinder, Cantor of Temple Emmanuel in that city. As a result of his influence Bloch two years later received a handsome commission from Gerald Warburg (to whom the work was dedicated) to write a Sabbath Morning Service for that Reform congregation, based upon the text of the American Union Prayer Book for Jewish Worship. In addition Bloch received an annual grant from the Stern family – prominent patrons of the Arts in San Francisco – to last ten years from 1930, on condition that he devote himself to composition exclusively. He received guidance from Cantor Rinder (who also suggested traditional chants such as that for Tzur Yisroel in the Jewish Ahavah Rabbah mode), and it is fascinating to see in his copious correspondence with Rinder and others how the work germinated and developed, once he had settled in the Swiss village of Roveredo-Capriasca, high above Lake Lugano:

“… I have now memorized entirely the whole Service in Hebrew… I know its significance word by word … But what is more important, I have absorbed it to the point that it has become mine, and as if it were the very expression of my soul … It has become the very text I was after since the age of ten … a dream of stars, of forces … I declaim out loud, amidst the rocks and forests in the great silence … It has become a “private affair” between God and me …