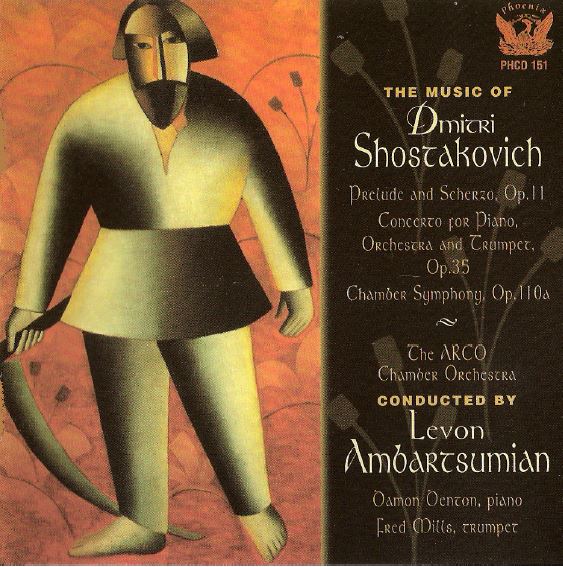 Concerto No.1 for Piano, Orchestra and Trumpet

Concerto No.1 for Piano, Orchestra and Trumpet

Dmitri Shostakovich (1906-1975) was one of the most prominent and prolific composers of the 20th-century Russian music. Unlike his older contemporaries Prokofiev and Stravinsky, Shostakovich is alone in that his entire compositional life was spent within the confines of Soviet aesthetics. Although often at odds with the will of the state, Shostakovich maintained his compositional integrity, at times delaying the release of works until the political atmosphere was more favorable. Twice in his lifetime, Shostakovich was subjected to intense political scrutiny: in 1936 when his internationally successful opera Lady Macbeth of the Mtsensk District was criticized suddenly in the Pravda, and in 1948, when Stalin’s cultural minister issued a decree denouncing a number of composers, including Shostakovich and Prokofiev. Stalin’s death in 1953 instigated a gradual relaxation of artistic constraints. However, despite his early experiments in modernism, Shostakovich’s tendencies remained more conservative, and he often criticized the Western avant- garde. An early work, Shostakovich’s Prelude and Scherzo for Octet, Op. 11 (1924-5) was probably composed while he was still a student at the Leningrad Conservatory from which he graduated in 1925. His First Symphony, Op. 10, written as a graduation assignment, met with great critical acclaim at its premiere in Leningrad in 1926. Of the previous nine opus numbers, only Op. 5 has been published. The octet, scored for double string quartet, is basically unsentimental, yet influenced by the “revolutionary romanticism” of the 1920s in Russia. The slow, brooding Prelude followed by an exuberant, exhilarating Scherzo becomes almost a trademark of his later works. Shostakovich’s Concerto No.1 in C minor for Piano, Trumpet and Strings, Op. 35 (1933) premiered in Leningrad in 1933 with the composer at the piano and is full of prankish humor, possibly as a challenge to the traditional Russian concerto. It begins immediately with a series of rhythmic and harmonic clashes reminiscent of Stravinsky. The solo trumpet part, while playing a more accompanimental role, consists of commentaries influenced by military calls and by jazz. Often Shostakovich quotes other pieces, including his own works, mixing genres in a totally modern way while still adhering to the confines of “socialist realism” expected during this time. In the second movement Shostakovich presents a parody of a theme from his ballet The Golden Age (1935), sometimes in a jazzed-up version. He includes excerpts from his opera Christopher Columbus (1929) and Beethoven’s Rondo a capriccio in the final movement. With the composer’s permission, the violist and conductor Rudolf Barshay transcribed Shostakovich’s String Quartet No. 8 in C minor, Op. 110 (1960) for chamber orchestra, which, in accordance with Shostakovich’s wishes, was given the title of “Chamber Symphony.” Subtitled immediately after a visit to Dresden, Germany. He was overwhelmed with emotion after learning of the complete devastation of the city, a result of Allied bombing raids in February 1945, in which 140,000 people died. Consisting of a sequence of five uninterrupted movements, the emotions range from quiet poignancy to violent, faster sections, including one depicting the actual bombings. Often described as autobiographical since the dominant theme consists of Shostakovich’s musical signature D-S-C-H (D-Eb-C-B), it is at the very least an extremely personal outcry against war. He also includes quotes from many earlier works, including his Symphonies Nos. 1, 5, 8 and 10, his Piano Trio No. 2 and the revolutionary Russian song Languishing in Prison. Most telling is Shostakovich’s inclusion of a quote from the line “Tortured by merciless enslavement” from his opera Lady Macbeth.