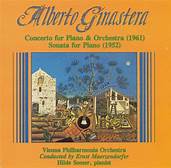 Ginastera’s “Concerto for Piano and Orchestra” was written in early 1961 on commission from the Koussevitzky Music Foundation and is dedicated to the memory of Serge and Natalie Koussevitzky. When the Piano Concerto had its world premier during the Second Inter-American Music Festival at Washington, D.C. on April 22, 1961, Irving Lowen wrote glowingly of the Argentine and his work in the usually austere scholarly journal “The Musical Quarterly”: “Good as the Festival was, there was one figure who towered head and shoulders above his colleagues-Alberto Ginastera.”

His “Sonata for Piano” was composed in 1952 for the Pittsburg Contemporary Music Festival on commission from the Carnegie Institute and the Pennsylvania College for Women. Johanna Harris, pianist-wife of the eminent American composer Roy Harris, premiered the Ginastera Sonata at the Pittsburg Festival on November 29, 1952.