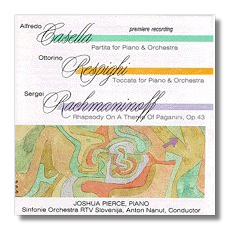 Sergei Rachmaninoff      Rhapsody on a Theme of Paganini

At twenty-one minutes Respighi’s Toccata for Piano and Orchestra is really more of an extended concert piece, which opens in a chaconnelike frame of mind with some heavy, massive chords and solemn voicings, then segues into a lyrically musing Andante before the somewhat belligerent “toccata” proper takes charge. Although there once existed two rarely encountered LP recordings, this version supersedes both on all grounds, particularly because of the theatrically emphatic flair of its presentation.

Pierce and Nanut reinforce the neo-Baroque sympathies of this program with a first recording of Alfredo Casella’s “Partita for Piano and Orchestra.” Though Casella wrote numerous concertos, somehow he never got around to an actual piano concerto, and this “partita”-in which the soloist and his accompanists interface in a more collaborational than oppositional spirit-lives up to the historical and formal associations of the genre in the reach and rigor of its ideas and their elaboration. Not at all the expected neoclassical romp in brittle, tinkling “concertina” style, its three movements (Sinfonia-Passacaglia-Burlesca), with their spiky, driving, polytonal modalism and allusions to Italian folk tunes, show Casella’s forceful fluency in its strongest light: in fact, this may be among the best of the composer’s many essays in the concertante idiom.

A comparably dry, detached, and deliberative approach is applied most fruitfully to that old late- Romantic virtuoso warhorse-the Rachmaninov Paganini Rhapsody (hence the “Italian Connection”), thus illuminating a whole new facet of the Russian composer by transforming the “rhapsody” into an example of the kind of variational neoclassicism which Eric Salzman pinpoints so well in his excellent annotation, and therefore enabling the Rachmaninov to fit right into this program of works all written within the same ten-year span (1924-34). All three performance on this Phoenix release are extraordinarily well meshed: Pierce and Nanut work together like a team of well-trained thoroughbreds, and the Yugoslavian engineers supply a matchingly sharp, vibrant close-up acoustics. Highly recommended.