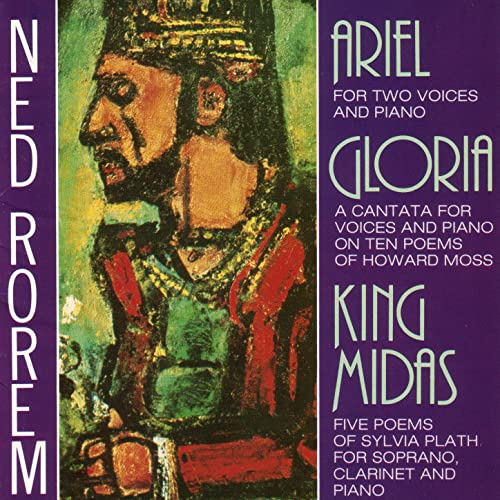 Gloria (For Two Voices and Piano)

King Midas (A Cantata for Voices and Piano)

“Ariel” was a gift to my friend Phyllis Curtin. the cycle was composed in New York during May, 1971, and first performed by Phyllis Curtin, with clarinetist David Glazer and pianist Ryan Edwards, at the library of Congress in Washington on November 26. Ariel is a setting of five poems of Sylvia Plath.

“Gloria” was composed during May and June of 1970, in new York and at the MacDowell Colony in New Hampshire. It is a gift to all singers who bemoan the lack of duets. These nine Latin songs are only part of an unending series I am projecting, for various pairings and combinations, of varying difficulty, trios and quartets and-why not?-vocal octets, mostly in England, and mostly for the fun of it. The first performance took place on James Holmes’ Chapel Concerts Series, on November 26, 1972, when Phyllis Curtin was joined by mezzo helen Vanni, and by the composer at the piano, at the Chapel of the Intercession in New York City.

“King Midas”, a cycle of ten songs for two voices alternating, was composed in Paris during the late spring of 1961 (except for “The Princess’ Song” which was written in 1956 and published as “See How They Love Me). The first complete performance was given on March 11, 1962 at the fourth and final Rorem-Flanagan recital in Carnegie Recital Hall, by tenor David Lloyd, soprano Veronica Tyler, with the composer at the piano.