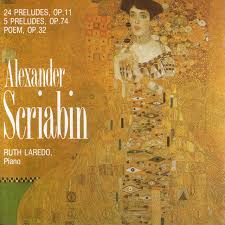 Alexander Scriabin was born on January 6th 1872 in Moscow. As early 1892, and before completing his piano and composition studies at the Moscow conservatory, he had embarked upon a career as piano virtuoso, which he would pursue practically until his death in 1915. To confine Scriabins Works and musical personality to existing models proves virtually impossible for several reasons. In a short space of time – 30 years at the most – he had written around a hundred works, of which 74 gave a pre – eminent role to the piano solo. Evolution of style through this prolific output was absolutely staggering. The early works still show the influence of Chopin and Liszt (for example, the Etudes Op. 8), but upon contact with Wagner his musical language enriched itself to such an extent that there resulted a dissolution of tonality (as in Op. 65). Although he remained loyal to the piano from 1890 Scriabin turned towards the orchestra. With his Symphonic works – the Divine Poem of 1903, the Poem of Ecstasy of 1907, Prometheus or the Poem of Fire of 1910 – Scriabin started the building a system of ideas both philosophical and mystical in nature, but which jeopardized his music reaching the general public for a number of years. He was a leading innovator in the field of harmony and rhythm – his last compositions are atonal and frequently contain superposing of rhythms drawn from different periods – but he died before finishing his final work, Acte Prealable. The libretto for this secular mystery, written by the composer himself, plainly reveals the ultimate goal toward which he was striving : transfiguration of the Cosmos through art.