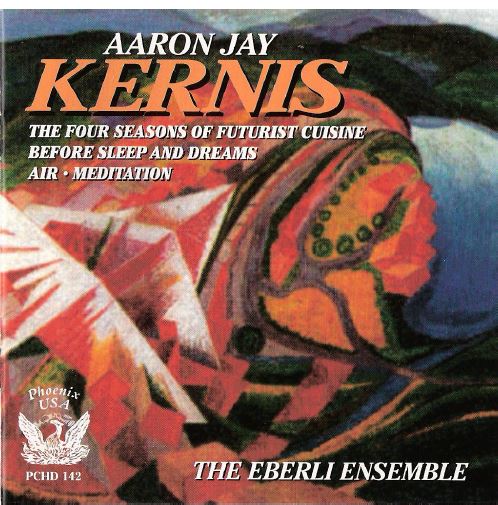 The Eberli Ensemble       The Four Seasons of Futurist Cuisine

The four works contained on this disc span a twelve year period (1981-1993) in my compositional output and represent a broad range of styles and musical concerns. Consistent in all these pieces is a deep lyricism which is supported by the contrast and flow between consonant and dissonant harmonic worlds. My early student works were especially influenced by the process-oriented Minimalism as found in the early works of Reich or Glass; as time passed, the lyricism and stylistic freedom that is so essential to my work came more to the fore, particularly as I embraced a diverse range of musical influences in the years following graduate study at Yale School of Music.

In 1981 I was a student at the Manhattan School of Music in New York City, living not far from where John Lennon was brutally shot and killed. I found myself deeply moved by the outpouring of grief and love that attended that tragic and unexpected event, and in homage to Lennon, I composed Meditation (in memory of John Lennon) for cello and piano, premiering it later that year at the Manhattan School with cellist Jeanne Lewin. Simple and meditative, this gently pulsing and elegaic music utilizes techniques borrowed from Minimalism to stretch the tonal harmonies and melodic shapes of Lennon’s beautiful song Imagine. This piece holds the seeds of my occasional yet ongoing concern with combining elements of popular and contemporary classical music to create a fresh and invigorating synthesis, seen in later works such as New Era Dance and 100 Greatest Dance Hits.

I continued to use compositional processes based upon Minimalism until 1983, when I felt it was time for my music to become freer and less rigorous. Many works from that period were concept-or image-based, taking their inspiration indirectly from, for example, works of art I’d seen, ideas that interested me, or experiences that had been particularly meaningful. I developed an interest in children’s’ games and texts about children in the mid-eighties, and it was through these interests that the piano suite Before Sleep and Dreams was created. Its central Lullaby, which is often performed on its own, was composed initially as a separate movement in 1987 for pianist Anthony De Mare; the rest of the suite took shape in 1990.

Before Sleep and Dreams is reminiscent of the spirit of works such as Schumann’s Kinderscenen or Debussy’s Children’s Corner, and contains references to the Romantic and Impressionistic keyboard styles of Debussy and Chopin. The structure of Before Sleep and Dreams is based on my idea (not actual experience) of what putting a small child to bed might be like. The peaceful bell-like tones of Before lead directly into the gently hyperactive scherzo Play Before Sleep. Lullaby follows, with a melancholy and searching tone that suggests, through the rocking motion of the minor thirds that open and pervade the movement, the orchestral world of Mahler. Lights Before Sleep imitates, through a pulsing repetition as in my earlier Minimal works, the flashing and flickering lights I’d see as a young child on my bedroom wall just before I fell asleep. The sonorous final movement, Before Sleep and Dreams, closes out the suite with reminiscences of the earlier scherzo and, ultimately, a peaceful sense of repose.

“The Futurist Cookbook is a late manifestation of Italian Futurism, a passionate and highly influential movement in art at the beginning of the century. When Marinetti published the first and most famous of his Futurist manifestos in February 1909, it marked a definitive moment in the shift from nineteenth-century Romanticism to a twentieth-century passion for speed and technology. What prompted Futurism were radical innovations in physics, technology, painting and music, and an uneasy political atmosphere which was soon to erupt in global conflict and national revolution. The Italian Futurists strove to liberate language, art and life from tradition and convention. Futurism can be called the first mass art movement of the twentieth century. It was a kind of romanticism about the humanizing possibilities of technology. They chose the accessible form of the manifesto to spread their message, backed up by a publicity tour. Marinetti, a powerful public speaker and a wily journalist, was a master of these popular forms of communication. It was a highbrow matter, to try to raise the artistic consciousness of the nation en mass. It leads, among other things to the unique joke of The Futurist Cookbook. No other cultural movement has produced a provocative work about art disguised as an easy-to-read cookbook.”

(from the introduction to the Futurist Cookbook by Lesley Chamberlain, Bedford Arts Publishers, San Francisco, 1989).

Around the time I composed Before Sleep and Dreams I was given a copy of F.T. Marinetti’s The Futurist Cookbook as a birthday present. Coincidentally I was approached by Pat Gidwitz to write a celebratory work for her husband John’s 50th birthday. Commissioned by John’s mother Adele and sister Susan, the premiere of the resulting work, entitled Le Quattro Stagioni Della Cucina Futurismo, took place on Martha’s Vineyard on August 30, 1991, with John’s close friends Jorja Fleezanis (violin), Andre Emelianoff (cello), and Christopher O’Riley (piano) performing and Michael Steinberg narrating.

Like Before Sleep and Dreams, my Quattro Stagioni also looks back to earlier musical styles, yet its tone is entirely different. I intended this piece to be a sort of “historical recreation” of what I imagined music written to accompany these early modernist texts might have sounded like. References to bitonality and early twentieth-century chromaticism, along with parodies of Wagner and Bruckner and sappy romantic popular song, alternately mirror and foil the text in an appropriate spirit. At the time I composed the work, I was also aware of certain other parallels that made the Marinetti texts both compelling and topical for me. A fascination with new technologies within an atmosphere of political decay and intolerance reflects our own time, and the rise of Fascism in Italy when these texts were published mirrors certain political trends on the current national and international scene. The first movement text, Manifesto, contains an excerpt from Marinetti’s pathbreaking Futurist Manifesto of 1909; the remaining texts come from the Futurist Cookbook, written in second wave of Futurism in the 1930’s.

Air, the most recent piece on this disc, was composed in 1995 on commission from Joshua Bell and the Houston Society for the Performing Arts. Couched in a sweeter, lyrical language and weighted by the drama of the work’s middle section, Air presents two singing yet contrasting melodies that are continuously varied and developed inside an nearly symmetrical ABCBA/Coda structure. This piece developed as I became familiar with Joshua Bell’s performing style, uniquely lyrical virtuosity, and brilliant sound. Except for a nod to the American sound of the open fifths in the work’s first few bars, this piece is in no way an homage to other musics; it represents my journey toward finding an ever more personal voice and style of composing. Since 1995 I have made two other version of this work, for violin and orchestra and cello and piano. Air is dedicated to my wife Evelyne Luest.